In the first part of our guide we covered spore syringes and jar prep. In the second part, we’ll go through everything from incubation to fruiting. If you’ve ever wondered how to grow magic mushrooms, keep reading part two of Smokable Herbs’ guide.

Once your substrate is prepared, it can be loaded into jars. Leave at least 1/2″ of head space in each jar, and then fill it to the brim with vermiculite. This extra layer acts as a barrier to keep out molds and other fungus that want to colonize your jars in place of magic mushrooms. Once you’ve got your jars packed, put on the bands and lids, tape over the holes with duct tape, and wrap the lids with aluminum foil in order to keep out moisture. Process the jars at 15 psi in a pressure cooker for 45 minutes.

After your sterilized jars have cooled, they can be inoculated with your spore syringe. Take off the foil and peel back the tape. Inject less than 1cc of spore solution into each hole. Even a fraction of a milliliter of the solution has thousands of spores, so use a very light touch. Inject every hole and then put he tape back over them for incubation. 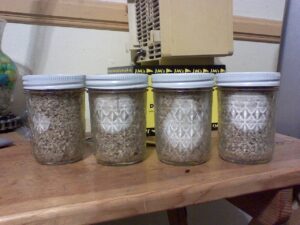 Incubation is nothing more than keeping your jars warm. They need temperatures in the high 80’s for ideal incubation, but the mycelium will grow at room temperature and only begin to die back at 100F. You should incubate the jars for a few weeks, until the entirety of the substrate is snow white and full of mushroom mycelium. Colonizing jars are pictured to the right, courtesy of mycotopia.net.

Once the jars are fully colonized, including the bottoms and throughout the cake, you can prepare your fruiting chamber. The only thing you really need to do is moisten some perlite and put it in the bottom of the tote. Unscrew the jars and place them vermiculite-side down on their own lids into the perlite.

Make sure your perlite stays damp but not wet. This will provide the humidity in the air that the cakes need to stop from drying out. Every day, you should take the lid off and use it to fan the air out of the chamber and replace it with new air. This is called fresh air exchange, and it’s important for the health of your mushrooms.

After a few days you’ll see tiny mushrooms called pins or primordia. Continue fanning them every day as the pins mature into full-sized mushrooms.

After most of your mushrooms are mature, you’ll notice that the cakes themselves are much lighter. This is due to water lost through the fruiting process. You can pick your cakes entirely clean and then dunk them in distilled water for a few hours. This is called dunking, and it will re-hydrate the cakes and prepare them for another flush of mushrooms.

That’s all there is to growing magic mushrooms. It might seem complicated at first, but it can be as simple as you make it. Be careful when you grow magic mushrooms, the process is illegal in most areas. Check your local laws before you begin.

1 thought on “How to Grow Magic Mushrooms, Continued”